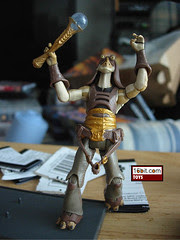 Bio: Gungan warriors emerge through the misty swamps to the battlefield where they'll take on the Trade Federation's droid army. A Gungan blows a battle horn to signal the solemn beginning of this crucial fight to free the planet. (Taken from the figure's cardback.)

Commentary: So close! The Gungan Warrior in 2009, the first new one since The Phantom Menace shriveled up and went away as a marketable brand for Star Wars, has the greatest sculpt of any Gungan ever. That's the good news. The bad news is that they cheaped out on the deco. The sculpt is a vast improvement over the Power of the Jedi release with added articulation making it a super-articulated release. His battle horn fits into his belt for support while he holds it, and he even has a holster for his Atlatl (boomer stick thing). The only issue I have is that the figure should have a really nifty pattern on his skin, and instead Hasbro gave it a solid color. They got it right on Jar Jar and other Gungans, but for some reason left it off here.

Collector's Notes: This one came and went, but seemed ultimately findable. You may even still be able to find one at retail.

Downside as an army builder, is that the belt isn't removable. A bunch trumpeteers isn't quite the grand army.