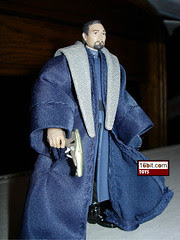 Bio: A member of the Galactic Senate, Organa is also First Chairman and Viceroy of Alderaan. When Anakin falls to the dark side and Padmé dies in childbirth, Bail and his wife Breha adopt one of the twins, Leia, to raise as their own daughter. (Taken from the figure's cardback.)

Commentary: If there's a short list of things fans ask for in very small numbers that Hasbro, for some reason, does, Bail Organa belongs on it. We got not one, but two figures based on the character's appearances in Revenge of the Sith. This one is based on the ending of the film, where he has no dialogue and does nothing other than hand a baby to some lady they never named through the course of the film. In other words, a fine example of top-notch storytelling. The figure itself has an acceptable face sculpt and decent articulation, although the legs won't be doing much due to his long blue plastic robes. An added cloth robe fits over the figure and is completely removable, which adds a bit of texture to the figure but ultimately this accessory doesn't look very good and makes the figure look cheap. Cloth is tough to do well, as Hasbro continues to illustrate.

I would qualify this figure as unremarkable and not essential. It's not bad-- it's just overwhelmingly average and a second (technically, fourth) ROTS-inspired Bail Organa toy. Do you need more than one? Probably not. He won't disappoint you if you like the photo, but he's not going to delight you, either.

Collector's Notes: One of the worse sellers in 2008, this figure may even still be available in some more rural or lower-trafficed stores. $8 felt like a lot, and on eBay he goes for as little as $4 before shipping. I would only advise you jump on this figure if you're in need of his build-a-droid part, or if the price was below $5 as part of a collection or something. Again, he's not awful, just not any fun and rather dull. Variation collectors should take note Bail exists in both a pale skinned (pictured) and a tan version, just like his wife Breha Organa.

Email ThisBlogThis!Share to TwitterShare to FacebookShare to Pinterest
Labels: Revenge of the Sith, Senators, TLC