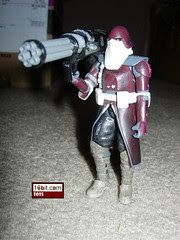 Bio: Galactic Marines are front line forces that are sent into battle to take on enemy forces that are especially powerful and difficult to conquer. (Taken from the figure's packaging.)

Commentary: Second verse, basically same as the first. This Galactic Marine is, at face value, the same as the early 2007 individually carded one but with a new gun. This is wrong-- the figure is still the same 14-points-of-articualtion mold that has a hard time standing up due to the weird boot shape, but the coloring is actually quite different. The maroon armor is a lot darker, the dirt pattern has been changed, and the figure's head is much paler than the first edition. There are subtle changes elsewhere, too, but the key point is that this is a very different looking figure when you put them side-by-side. Aside from the pale head, I think I prefer the added detail on this version. The new gun is cool, but it's been packed with other figures-- so I wouldn't consider it a selling point so much as a nice bonus.

Collector's Notes: Released shortly after Thanksgiving 2007, this was the more popular of the two Battlefront sets. The line proved popular enough for Hasbro to reissue them in 2008 in white-and-blue packaging as a Toys "R" Us exclusive, and this seems to have killed the market on it-- both packs can be had for under original retail on eBay now.

For fans keeping track, this mold has been released Galactic Marine (2007), this version, an all-white Galactic Marine for Wal-Mart, a purple repaint for Target, and in a Battle Pack with minimal changes.

This had nothing to do with the review, but I never understood the point of the Galactic Marine. "HEY, these are precursers to SNOW TROOPERS." But snow troopers were just stormtroopers in cold weather gear. So why do the marines dress like purple snow troopers? What makes them "marines" per se? (We only see them planet side, so they aren't like the shipboard marines of old Earth history.)

Seemed like an unneeded nod to the Original Trilogy and an excuse to add more clone types for merchandizing.