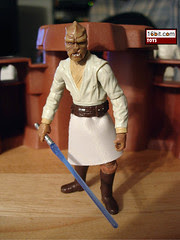 Bio: Tarados is one of the two hundred Jedi who arrive on Geonosis to stop the execution of Obi-Wan, Anakin, and Padmé. The Klatooinian Jedi storms into the arena with his lightsaber ablaze to fight the Geonosian warriors and battle droid army. (Taken from the figure's cardback.)

Commentary: Sometimes, Hasbro can really impress when doing a refresh of an old mold. Tarados Gon is a modified Sora Bulk with a new head, legs, and lower cloth skirt piece. At first glance, you'd probably never be able to tell. As far as I'm concerned, it's basically a new mold-- kudos to Hasbro for finding a shortcut that really worked well. The end result is a clean-looking super-articulated figure with a new head with a lot of personality, which is nice for a rubber mask. It's not a stunning level of detail, but as Jedi go it's on the happy side of good. With dozens of Jedi in the toy line it's difficult to really stand out, but this is certainly a worthwhile addition to any toy box. It's almost a shame you will probably never see one for retail, at $7 or $8 it's great. At $12+ you might not feel it has the value you seek.

Collector's Notes: This figure was from a wave that most of the USA expressed difficulty finding-- you won't see it in stores now, barring some freak warehouse find. You will have to pay more than retail for this one. It's not exactly a stunning creation, but it's certainly worth the effort to own one. Particularly if you want a HK-47.

Email ThisBlogThis!Share to TwitterShare to FacebookShare to Pinterest
Labels: Attack of the Clones, Jedi Knights, TLC

Hasbro could've chosen him for the next Arena 2-packs, instead of Anakin, Obi-Wan or even Dooku (they put C-3PO and R2 together, so they don't have to be "versus" pairings).

Hasbro seems to do this too much lately. The last wave of a theme gets shortchanged. You'd think the tooling costs would motivate them to make "enough" to go around.