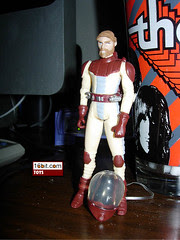 Bio: Protected from the vacuum of space by a space suit, Obi-Wan uses a rocket backpack to board a Separatist ship. His exhausting quest to locate Count Dooku has lead him to this giant cruiser. But before he completes his mission, the Jedi Master is in for plenty of trouble - battles with the enemy, crash landings and space pirates! (Taken from the figure's cardback.)

Commentary: Major Matt Mason would be proud of Obi-Wan Kenobi, complete with fancy retro space suit. I was utterly delighted to see this figure, and then I found out it was on the TV show too and I wasn't so sure. (Just kidding.) The notion of a goofy environment-specific outfit is something Hasbro has tended to avoid with Star Wars unless there's a precedent for it, so seeing a release like this helps to make The Clone Wars feel like a line that may actually be sold to kids. You know, in the same way that Breha Organa and Yarna d'al' Gargan look like figures that no kid would want in a million years. Hasbro did a bang-up job with this all-new figure, giving Obi-Wan Kenobi a more true-to-the-show head and an entirely new space suit body which, to date, has not been reused for any other figure. The outfit combines a number of elements you've seen elsewhere with a new body suit. The belt is very similar to that on the McQuarrie Jedi figures, the shoulder armor is similar to his normal white outfit, and his backpack is modeled closely on that of the model used by the Clones and Jango Fett on Geonosis. The sculpt is cartoony, but detailed with lots of folds, creases, and padding giving it a sense of some bulk. It's also super-articualted, which is something Hasbro hasn't done much for its basic, individually-carded Obi-Wan Kenobi figures frm the TV show.

I think this one is great. I was particularly pleased we also got matching Anakin and Ahsoka figures. This is one of my all-time favorites for the cartoon line so far, and I strongly suggest you get one if you're lucky enough to find it.

Collector's Notes: While hard to find, the current going rate is at or below retail, so keep that in mind when deciding to buy this one. He came out about a year ago and never became truly "common" in my findings.