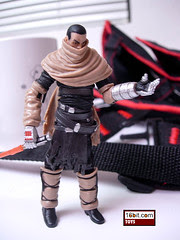 Bio: Galen Marek was a Human male taken as a secret apprentice by Darth Vader from his father, a Jedi named Kento Marek, on Kashyyyk during the Great Jedi Purge. For years, the Dark Lord trained him, under the codename Starkiller, in dark side arts and to eliminate his enemies, including Jedi who survived Order 66. (Stolen from Wookieepedia.)

Commentary: Hasbro sure doesn't make it easy to get the hero of the Force Unleashed games-- with five figures to his name, Galen Marek is only sold in multi-packs. This version of Starkiller is based on the Raxus Prime outfit, complete with gloves, scarf, and other add-ons to keep him reasonably free of all the toxic jump and other poisons that would likely do him in a whole lot faster. The figure itself is based on the 2008 "Secret Apprentice" version of the figure with some new limbs and accessories. Hasbro did a great job masking its use of existing tooling with these new parts, and this figure has a new head sculpt which is more closely modeled on Sam Witwer. (The first three apprentice figures were based on early renders and concept art.)

The figure has a great paint job, superior articulation, and a nice distinctive lightsaber sculpt. So while Hasbro did cut corners, it sure doesn't feel like they did here. Nice work. I suggest you get this one if you were a fan of the game, which you may not be, but I am so I dig it.

Collector's Notes: At press time it seems the sets are available depending on your market. Some towns have them, some don't-- so you may want to pick these up before they go away, or before the sequel to the game hits at which point I would expect these to evaporate from store shelves quickly.