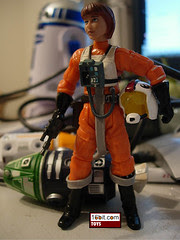 Bio: Shira Brie joins Rogue Squadron after the Battle of Hoth and gains the trust of her fellow pilots. (Taken from the figure's packaging.)

Commentary: After watching the Ironic Punishment Division of Hell as seen on The Simpsons like 17 years ago, Hasbro said "all right fans, why don't you have all the Rebel Pilots IN THE WORLD?" (In 2008.) Shira Brie is one of no fewer than 4 figures to share the same body construction released within about 18 months. Four nearly-identical orange jumpsuited women who really aren't any different except for the heads and helmets. Having done the same thing with other pilot bodies, a tremendous number of pilots hit the market and fan zeal quickly turned to apathy, because nothing else is a Clone Trooper.

This is not to say this wasn't an exciting release, nor is it to say it isn't a quality product. The figure has the 14 points of articulation you crave, a removable helmet, a holster, and a great head sculpt which tries to be slightly more realistic than that of the art in the comic series. The sculpt is good, the head sculpt is nice, really my only gripe is that her hair isn't as red as it was in the Marvel comic series. I like the creative license they took with her hair, and the helmet looks fine. If you wanted this Empire Strikes Back-era Rebel pilot turned dark lord as a toy, here she is! Be glad Hasbro made one, because odds are the glory days of Rebel pilots is now over.

Collector's Notes: Upon release, items in this assortment had prices which varied from store to store. They were later sold, without the Wal-Mart stickers, at stores like Ross for about $15. I found mine at Wal-Mart for about $15 when it first hit, so your mileage may vary, but the magic number for the set is about $15.