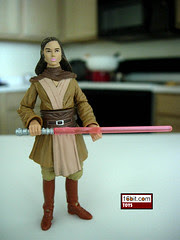 Bio: Jaina Solo is the daughter of Han Solo and Leia Organa Solo. She is strong in the Force, as is her twin brother Jacen. An accomplished pilot with an aptitude for mechanics, she becomes an apprentice to Mara Jade Skywalker. (Taken from the figure's packaging.)

Commentary: While not a 100% new figure, it's new enough that Hasbro gets credit. Jaina Solo recycles some parts from the 2008 Stass Allie, but let's face it, arms and legs aren't all that distinctive. The new head and body (and new deco) make her look pretty gosh darned new, and her scarf thing-- which isn't a removable accessory-- makes her look quite distinctive as Jedi action figures go. As always (as of late), she has 14 points of articulation and can do pretty much anything you would want a Jedi to do. Her hands (and head) are brown plastic, painted with the flesh parts, which seems to add a little more weight to her appearance. Painted plastic tends to look nicer than raw plastic, as it brings out a little more detail in the face.

Her lightsaber doesn't match the on-pack illustration, in color or in the hilt's design. Heck, her outfit doesn't match, either, but the one thing I did notice was that the blade color should be a little more purple than red. She has been seen in this outfit, though, and I have to say I'm happy they didn't just make her a pilot and reuse that body again. Like most Expanded Universe figures, I'd put her at "Why not?" After nearly 20 years, she finally got a toy-- so you may as well buy it because there probably won't be a second.

Collector's Notes: While reasonably uncommon, this shared exclusive is, as all toys, available online somewhere. When buying this figure-- especially loose samples-- take care to look at the condition of the face and hands. If the figure received any wear, it's probably going to show some paint rubbing off on these spots, so be sure to keep an eye on them.

As much as I really liked this figure and like you Adam find her somewhat distinctive, I have to say in *this* assortment she's probably the weak link -- which is saying more about the assortment than her. It's a shame this assortment is so tough to find, as it's probably the best one Hasbro's done for a while, and except for the excellent Episode IV wave with the perfect Old Ben and Joe Johnston trooper, is the best wave in years. Pity it's so hard to get.

You point out why I dislike paint faces over molded plastic flesh.

A few chips and you get a lousy looking figure. Doesn't help the after market much, either (then again, neither does ball joint heads and swivel wrists, any rough playing kid will rip them loose and lose them.)

I still remember my vintage At-At commander, Jedi Luke and General Madine with their chipped noses.