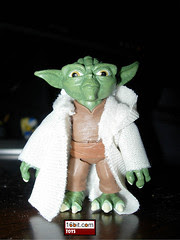 Bio: Yoda goes to Rugosa to negotiate a deal with king Katuunko of Toydaria that will allow the Republic to build a supply base in the system. Count Dooku intervenes with a test for the Jedi: prove the Republic's strength by battling Dooku's droid army. Yoda accepts the challenge, and shows his combat expertise as well as the power of the Force. (Taken from the figure's cardback.)

Commentary: This Yoda mold was made to make two different colored Yodas in 2009, both were released near enough to one another where it's hard to tell which, if either, was truly "first." This figure is essentially super-articulated (no knees, as the legs are too small) and is about as good as we'll probably ever see for an animated Yoda. Big head, lots of detail, just enough hair... he's great. This version has very dark green skin, while the Wal-Mart exclusive one (which came with a Clone Trooper) was a much lighter green. From the picture, you should be able to see that it's pretty great and as it's arguably the best version out right now... so just go ahead and get one. Yes, even if you have 14 Yodas already.

Collector's Notes: Hasbro didn't ship as many of these as I'd have expected, so it sold pretty dang well. Go get one if you can, either this or the 2-pack version (initially sold at Wal-Mart and later at Toys "R" Us.)

I think this is my favorite Yoda figure since the vintage days. I'm eager to see if the upcoming nuVintage figure can best it.