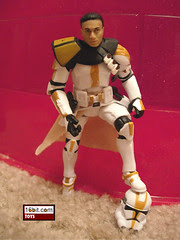 Bio: Clone troopers ride gelagrubs to patrol the fungal forests of Felucia. Also known as Felucian ground beetles, gelagrubs are easily domesticated in their larval form to be used as mounts. Republic forces invade Felucia to free it from the control of the Separatists and capture the Commerce Guild's headquarters located on the planet. (Taken from the figure's packaging.)

Commentary: More articulation is better, right? This Clone Trooper takes the now-familiar Star Corps design, as seen on Felucia, and adds a cloth kama as well as ball-jointed hips. Other than that, it's very similar to any of a number of Clone Trooper figures we've bought since 2005. The added range of movement in the crotch is specifically so the figure can sit on a giant grub. It's not bad, but at this point you probably don't need much of an excuse to buy a new Clone Trooper that's similar to ones you already have. The plastic kamas look better, but this one can actually ride a giant bug. The game goes to this version.

While neat, one figure and one barely-articulated bug isn't worth the $25 asking price-- it's not a bad set, it's just not $25 worth of toy. At best, it's $18. A second trooper would make it worth the purchase but it's achieving something of a major shelfwarmer status in some markets. I advise you not overpay for one, but retail isn't horrible.

Collector's Notes: This set, at press time, isn't selling worth a dang. I would suggest not paying more than $25 for it, ever. It's neat, but not really fun enough to justify premium prices. All the grub does is sit there, and he has an action feature pincher in his mouth. That's it.