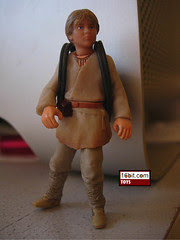 Bio: After enduring heavy damage during their escape from Naboo, the Naboo Royal Starship is forced to land on the desert planet of Tatooine. Returning from Mos Espa with Anakin Skywalker, Qui-Gon is ambushed by a figure in flowing dark robes - it is the evil Darth Maul. Ordering Anakin to the ship, Qui-Gon matches his awesome Jedi skill against the Sith Lord's sinister power. Both escape with their lives, but it would not be their last meeting. (Taken from the toy's packaging.)

Commentary: During Episode I it seems Hasbro decided that you were going to get an Anakin Skywalker figure if you wanted one or not. The kid-- in pretty much the same outfit-- had numerous releases, all of which were pretty tough to tell apart. He had two carded releases. He was packed with vehicles and games. He came in two Cinema Scenes. Truly, if you were going to collect this line, you were going to get the pint-sized Darth Vader because Hasbro was intent on cramming one down your throat. This release is one of the better ones in the sense that it isn't awful. His action pose, backpack, and deco are on the happy side of good, and his face paint generally was clean without a too-waxy plastic used for his face. Sure, they could make him a little livelier, but since the New Sculpt Train ended for the character in 2000 that seems decreasingly likely.

Collector's Notes: If you have at least one young Anakin figure, you pretty much have them all. There's nothing wrong with this release, but they're so samey that only the collector wanting truly everything should pay him any mind. If you're this person, get one. Also, the scene he comes with also includes one of Hasbro's best Darth Maul figures of all time in addition to a great example of Hasbro's work with a poncho Qui-Gon Jinn. You should get the set-- but don't expect much out of Anakin, he's the weak link in the box.

For my money by the pilot figure. Get a helmet for the figure and this cool little add on control for the Naboo fighter.

Somewhere I have the other pilot kid Anakin, the one with the permenantly attached helmet. I think it came with some dumb game. But I got mine used.