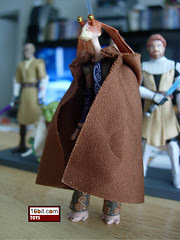 Bio: It's up to Jar jar Binks to save the day when Padme Amidala walks into a trap set by the Separatists on the planet Rodia. Donning a Jedi robe, Jar Jar hopes that the threat of dealing with a formidable "Jedi" will force Padme's captors to release her. (Taken from the figure's packaging.)

Commentary: After a nearly seven year hiatus, Hasbro did another Jar Jar Binks figure in the animated style which some of us have embraced and others still don't like. The figure was around for one assortment and quickly went away, which makes sense given that it's not particularly thrilling as toys go. It is a nice figure though-- 12 points of articulation, a good sculpt, and a lot of personality were worked into this one. Unlike the 2002 version which we just looked at, this one seems to have been designed by someone who actually understands the nature of the bumbling character with his lanky body and slightly awkward mannerisms. The "borrowed" Jedi cloak is a nice touch too, so he can be a bombad Jedi or whatever. No weapons were included-- which is reasonable, given he doesn't have a signature weapon-- but this does take a little "action" out of the figure. It's odd to think that a figure from the kid-driven line seems to be designed with collectors in mind, but it honestly felt to me that this is what Hasbro did on this one.

The cloak has a wire in the neck, so it can cling to him just fine. Hasbro did a great job here, even adding that scarf thing and a little purple to give him an added sense of old-school importance. (Purple was once a color of royalty, you see. Ask your Egyptian history buff buddies.) The figure is a couple of knee joints away from perfection; as it stands it's just merely a high point in Hasbro's cartoon catalog.

Collector's Notes: Due to his being in short supply and limited window of availability... he actually is worth something. People are paying a premium for this one. I have to wonder if Hasbro is doing this on purpose to drive collectibility in this segment. If you can find this one for $10 or less, I'd suggest grabbing him because he is a really nice figure and a great, unique character in the line. Hasbro did a good job here, so it's nice to see something of quality command a slight premium. It was only sold on the blue-and-white packaging to date, and were I a betting man I would not expect to see it in the next several months to a year. Possibly ever.

I thought this figure was one of the first really great sculpts we saw in the CW line, and he's still one of my favorites (although he's been surpassed several times by better figures at this point). He perfectly captures jar Jar as he was in the show and as you say Adam is really worth getting. Unless you're simply a Jar Jar hater, in which case, I would advise, in the words of Don Henley, to just 'get over it.'