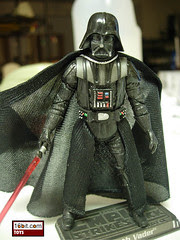 Bio: The Dark Lord of the Sith is obsessed with finding the young Rebel who destroyed the Death Star. Vader and his master are certain that this boy is the offspring of Anakin Skywalker. Following up on a probe droid lead, Vader quickly identifies the Rebel base on Hoth but arrives too late, as the last of the Rebels flee Echo Base in the Millennium Falcon. (Taken from the figure's packaging.)

Commentary: At some point Hasbro decided that you need to own this Darth Vader figure. The body mold has been sold in so many configurations that if you bought all the variations, you would probably have a pretty sizable collection. (More on that below.) With 14 points of articulation, it's pretty good. It's also unique in that the knee joint is a sort of Revoltech-esque ball, the figure's legs are jointed directly below the knee rather than at the heel. This allows for some unique poses and preserves the look of the sculpt. His elbows are cut joints, not ball-joints, which makes it a step back from previously released versions of the character. He does have the cool removable dome which exposes a scarred skull, but lacks the swappable hand as seen in the original mold's release as the 500th Darth Vader. While ubiquitous, the figure is not essential because superior versions were released prior to and after this one, and odds are you can get one of these for next to nothing on one of the many repacks available on the market. It's not a bad figure by any stretch of the imagination, it's just painfully common and Hasbro has one-upped it with several subsequent superior releases.

Collector's Notes: This mold started life as the 500th Edition Darth Vader in 2005. This release came next, which was reaccessorized as a Bespin Confession figure. The body was used in comic packs, Saga Legends, Battle Packs, and elsewhere. Also, this specific release came with a bonus holographic figure-- six different blue ones. I've been tempted to get every last flavor of this mold, but so far, have not done so because while obsessive I gotta stop somewhere. I did get all 6 blue holo variants, plus I kept a loose one on my desk since his release in 2006 until I moved my office in 2010. So I guess I can't dump on it too much, it's a nice one to keep around because it really does look nice.