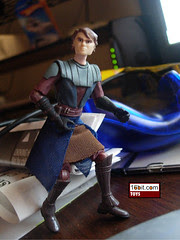 Commentary: Hasbro did three figures (so far) with this Anakin Skywalker mold, each slightly different. This was the first release, and it was notable at the time because he had jointed knees and ankles, a first for the animated-style Anakin Skywalker design. It keeps the same basic head, arms, and body as the previous issue but adds cloth elements for the lower robes and, of course, more joints. If you're going to get only one animated-style Anakin, this one isn't bad. It's easily distinguished from other releases of the mold because he doesn't have a significant scar near his eye-- the others look a little more worse for wear. I'd strongly suggest getting one (or more) of this version to go inside your various vehicles. This is clearly the best "pilot" Anakin figure in the first couple of years of the line.

Collector's Notes: This set came and went, but its elements aren't particularly unique enough to track down. The Battle Droid is similar to others with new wrists. This Anakin has been used for other releases. The STAPs are unique, but if you don't do vehicle variations, you can skip this one. (I do vehicle variants.)