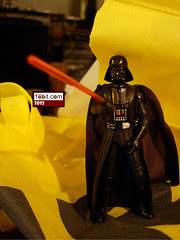 Bio: As Lords of the Sith, Darth Vader and Darth Maul draw their power and control from the blackest depths of the dark side of the Force. Darth Vader commands by terror and is key in helping Emperor Palpatine hunt down nearly all of the Jedi Knights. As a disciple of Darth Sidious, Darth Maul's highly trained physical and tactical abilities make him one of the most dangerous Sith apprentices in history. (Taken from the toy's packaging.)

Commentary: At one point this "Masters of the Dark Side" set, containing then-new sculpts of Darth Maul and Darth Vader, was a real rarity. I never once saw one in the wilds of retail, which, to me, means that it's hard to find. Today it doesn't go for a lot, and the figures have since been put into other packs. The real reason to buy the set is the display base, but the figures are quite nice. Darth Vader has a cloth cape on his shoulders and a plastic robe around his waist, plus fairly limited articulation in the arms. As a display piece, he looks great as he has excellent sculpting designed to mimic the armor as seen in the original Star Wars film-- note the unique gloves and the robes on top of his shoulders. He won't be good as a pilot, but as a diorama filler or as a display piece this is a great set.

Collector's Notes: The going rate seems to be close to original retail. This Vader figure also shipped in other configurations, including as a carded figure and in the Death Star Briefing set. If you just want the Vader, all versions are virtually identical and should be able to be had fairly cheaply.