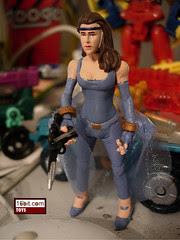 Bio: As Leia struggles to save the Alliance from being crushed by the Empire, she learns that bounty hunters are after Luke. She infiltrates Black Sun to find out why that crime syndicate wants Luke dead. The leader of Black Sun is Prince Xizor, who sees Luke as a way to get his revenge upon Vader and, at the same time, gain favor with the Emperor. Her mission is in jeaopardy when she meets Xizor and finds herself unable to resist the prince's strange power. (Taken from the figure's box.)

Commentary: As figures I never expected to see go, this Princess Leia certainly made the list. This is basically from a scene in which Leia tries to make Xizor think he's gonna get some, and then knees him in the balls. Truly, a great toy for kids, right? Well, we have her, and space bedroom wear is just as goofy as you can hope. If there's one thing that does it for me, it's headbands! (Actually, no, not really.) This Leia has more articulation than she can handle, and the ankle joints make her legs look a little chunky. She lacks elbows, but other than that is a pretty robust figure in terms of movement. In short, your reasons for buying this figure are "do you love Leia figures" and "do you need a new Xizor", the answer to both I assume to be "yes" and "sure, why not." The detail on the figure is OK, but it's not really an amazing release given what else Hasbro has been releasing in the past four or five years. It's worth buying and certainly fits the bill of a good modern figure, just not as a great one.

Collector's Notes: This figure may be available at a store near you still-- it was not a hit. Don't pay a premium for this one, if anything try to get it for under $10 because it's just that common.

This falls under "Why do some figures not get made but THIS one does?" Seems like the as-yet-released Noghri comic pack should have made it to market before anyone even remotely considered this pack. Oh well. And yeah, there's still PLENTY on the pegs here in Cincinnati.

I loved the comic packs, and I think the reason they were cancelled is not because of poor sales, but poor judgement on Hasbro's part. Of course sets like these and the White Wedge are pegwarmers. They're terrible for kids and collectors alike. But make a cool one and you can't find it.

This figure just stinks. I bought the pack on clearance and it still wasn't worth it. She's teeny with cankles, and if only the head sculpt matched her package art. Maybe the figure would've looked better if it had been made in 1996 when "Shadows" was fresh and the more comic/stylized of POTF2 would've made up for some shortcomings in the translation from print to action figure.

Leia may not be entirely to blame. Xizor was a major pegwarmer back in 1996-1997. So history repeats.

I think I'm the only person in the world that likes Prince Xizor and the comic figure was a brilliant representation of him. This Leia however is not worth the plastic its made of. The worst thing about it is the scale. Put her next to any other Leia. She's about half the size! What were Hasbro doing??

Have to side with the haters here; it's not only a bad figure, it's an unnecessary one. Was Hasbro thinking Xixor needed a core character to help him sell (if so, why even do him)? The Xixor in this pack was a massive upgrade, but this Leia just stinks. My thought when I first saw this pack (and again just now seeing the review) was, why do this unwanted figure when you could have done Guri? I know she's not on everyone's hit list, but even a new character as poorly done as this one was would have been a better idea.

If a core character was needed, Lando in Coruscant Imperial Guard or a redo of Luke in Imperial Guard disguise, or that Luke with the Hoth-vest look from Shadows. Or, horrors, a Chewbacca as Snoova redo! (That was an amusing figure for 1996, but a silly look for Chewie.)

Though, IIRC, those weren't in that issue. As if that mattered in comic packs!

I actually like this figure *a lot* (but I'm a sucker for Leia figures). The 'cankles' are nasty, but since the legs are cast in the blue plastic, a little bit of Goof-Off or Nail Polish Remover goes a long way in helping the aesthetics of the figure. True, it takes a way a bit of the 'sexy' in the outfit, but it's an action figure, and you're not supposed to find it sexy anyway.