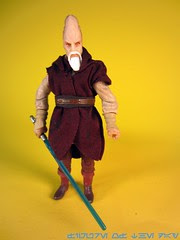 Commentary: One of the key arguments about any feature documenting these toys is "Is this different enough?" and the answer is usuall "sure, why not?"  Ki-Adi-Mundi, at first glance, looks the same as the 2005 release from Revenge of the Sith, but this late-run 2008 Mygeeto release has a few key differences.  The facial expression is painted in a way which just happens to look a little more intense, the tunic is splattered in hard-to-see dark brown mud splotches, and the lightsaber itself is now a one-piece weapon and mercifully dropped the removable blade gimmick which minimizes breakage.  I really liked the 2005 release, but the construction is better on this one overall... plus he has some awesome clone and droid figures.   If you're a new-ish collector just wanting a quality set of 5 prequel-based figures, this is a worthwhile Battle Pack to buy.

Collector's Notes: The "Battle on Mygeeto" Battle Pack was a very late release in the line, I saw a couple at Toys R Us and of course Entertainment Earth, and that was it.   The set had the very first super-articulated Bacara as well as two totally unique droids in it, so if it's still cheap on eBay and people haven't yet realizes that they missed it, I suggest buying it.  $30 or less for this set is a total bargain for the quality of what you get relative to what you pay for at Target these days.