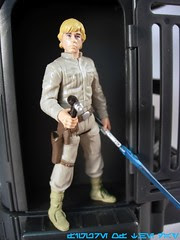 
Commentary: One area where I feel Hasbro has let down fans is making good toys, for kids, at prices which aren't awful.  This Luke Skywalker is a surprisingly toy-ish release, and is one of three new sculpts in a set for $20.  That basically brings us back to latter-1990s prices, with mid-1990s articulation.   The sculpting and deco on this figure are so delightful, I would advise you all to buy it.  Yes, even though 10 of you a week email me or post on forums about how I'm a terrible person for saying it.

While the 2010 Vintage Bespin Luke is close to a perfect figure, the 2012 Battle Pack Bespin Luke is a nearly perfect toy.  With only five points of articulation, he has no problems standing or sitting.  He balances well, he bends at the hips to sit in most vehicles, and he can hold his weapons with little difficulty.  The quality of the sculpt is really amazing, with a sharp level of detail that almost looks too good.  You can see all sorts of tiny wrinkles, folds, and other details which proves the sculptors put in a ton of work.  The head sculpt is also quite nice, but the kicker is that the hair is bright yellow.  If you're under 30 as of right now, you probably hate this.  If you're over 30, you may be delighted, because the original two Kenner Luke Skywalker figures with visible hair also had Crayola-bright wigs.   This figure might look even better with a proper color, but Hasbro has had difficulty matching the color perfectly - so going in the yellow direction makes it fun, because, well, they're not trying to be perfect.  They're trying to be interesting.

I am not one of the collectors who insists each and every figure have 12 or more points of articulation.  I'm pretty happy we got a ball-jointed head here, and while I wouldn't have minded a waist joint I can't deny that the final product looks good and holds together nicely.  It is a fun figure that works well as a toy and arguably better as a desk plaything, as super-articulated figures have a nasty habit of toppling over as their "sweet spot" for standing can be tricky to find.  With this Luke, he's got one pose.  And he's going to stand in it.  If I had my way I'd ask Hasbro to make the entire 1978-1985 Vintage line in this format, plus a smattering of Clone Wars and Prequel figures, but odds are that's going to never happen.

Collector's Notes: At Celebration VI, Hasbro confirmed (to me, in a Q&A) that there would be more "simple" articulation figures like this next year.  They didn't say what, but if the quality is on par with Luke here I'm happy.  This Luke figure didn't start shipping to stores until months after showing up online, so order yours from a dotcom or cross your fingers Target still has a few.  But if you like old toys, be sure to get it before it goes away.  It's nice.  I approve.

This is by far my favorite version of Bespin luke. The SA figure was great, but this one just seems to capture the character with aesthetics approaching perfection (I am in the over-30 crowd, so definitely biased). Kudos to Hasbro. I will buy whatever they spin-up in this welcome-format.

I LOVE this figure. Love the whole set. I'd happily buy all 90+ Kenner figures in this format.

This looks like a great figure, shame I haven't seen them at all here in the UK. Fingers crossed for a Saga Legends re-release!