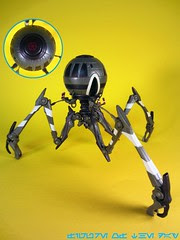 Commentary: Part of the fun (and danger) of making figures from a movie with digital models is that it can sometimes be tough to get a sense of scale. Particularly if the people doing approvals were asleep at the wheel. The 2008  Tri-Droid as unique Mygeeto deco, and is a redecorated version of a single carded figure sold earlier that year. It's larger than your average action figure, but nowhere near the size of the massive Walmart-exclusive Tri-Droid vehicle (Octuptarra Droid) which would come for the cartoon line. Given the design with this deco never appeared in the movie anyway (as far as I can tell) it's impossible to be "wrong," which means that for what it is, it's quite nice. The dark droid with the red and white highlights looks great, I particularly liked the separatist droid army faction symbol on the top of the head. There are little red lights all around the head, big white stripes on the legs, and of course, it's sizable. Each leg has multiple moving parts, although the design is a little wobbly and may need some care when it's time to display this one.

The figure is part of a pretty great set, so if you like a nice Battle Pack I'd say the Battle on Mygeeto may be right for you - each of the figures has unique deco, with the two droids having drastically different paint jobs. get it if you can!

Collector's Notes: This was the final "new" Battle Pack in the 87503 assortment, which mean it got that lovely Last Wave Syndrome. The big difference, though, is nobody seemed to care.  I saw it at Entertainment Earth and Toys R Us... and if memory serves, that's about it. It's $30ish these days, give or take.  That isn't a terrible price, really, although you may think otherwise if/when Hasbro resculpts Ki-Adi-Mundi and Commander Bacara. (It'll happen. Eventually.)