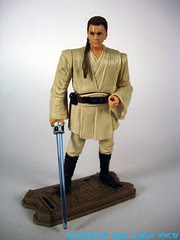 Bio:  Obi-Wan Kenobi battles Darth Maul in the Theed Royal Palace on Naboo. Obi-Wan becomes separated from Qui-Gon Jinn as the two Jedi duel the menacing Sith apprentice in the generator complex. When Obi-Wan is reunited with his Jedi Master, he faces an unexpected tragedy and must fight the powerful Darth Maul on his own.  (Taken from the figure's packaging.)

Commentary: While light-up lightsabers aren't anything new (we were given 3 of them back in 1998), Obi-Wan Kenobi is less clunky in this Phantom Menace incarnation, but still has a few minor nits to pick.  The sculpt is fantastic and by and large, the engineering is great.  You can remove his lower "skirt" piece so he can sit in vehicles-- good move, Hasbro!  The head sculpt is wonderful, one of Hasbro's finer versions of the actor.  It's swimming in personality.  The figure also has decent articulation, with ball-jointed knees for no apparent reason.  I can't complain.   The right arm is swivel-only due to the lightsaber mechanism, but Hasbro was kindly enough to give us a swivel wrist and ball-jointed elbow on the other side.  Kenobi's robes are nicely done as well, and on the whole this figure shames most of Hasbro's Obi-Wan Kenobi sculpts based on the first prequel film.

My only beefs?  I got two.  One, the battery isn't replaceable.  This probably won't be a problem for years (by my findings with similar toys, perhaps 10, 15, or even more years) but it could eventually be a problem when there's a battery corroding inside my prized action figure and I can't get it out.  Two, the shoulders are a smidgen wide, undoubtedly to house the electronics.  For a kid, in the short-term (say, 10 years) this is probably one of the best figures you can get in terms of fun play value.  It's durable, you can fight with Obi-Wan's saber and not be afraid it might snap off... and of course, it lights up when you push the belt buckle.   This figure is a bizarre item in that it's clearly designed as a toy for kids, but has exceptional sculpting the likes of which we glimpse at once in a blue moon in this line.  Don't get me wrong-- most of the figures are well-sculpted, but human head are rarely done this well, with this quality of paint and plastic, resulting in an execution where I really have to reach to complain.  (But of course I'm going to complain.  Non-removable batteries make me sad.)

Collector's Notes:  This item hit big earlier in the year and may still be at a store near you.  At $10 it might be a stretch... but I'd be lying if I said that this wasn't my second-favorite version of the character from this movie.  (The first?  Naboo Battle Pack 2012.)   When you get right down to it, the only thing Hasbro could do to make this figure better is maybe remove some articulation and slash the price a couple of bucks.