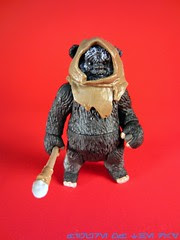 Commentary: I'm never sure if I should be happy or sad when a "gag" figure makes it out.  I'm usually happy because when it comes to Star Wars, my love of things which are new tends to be more genuine than not.   Nanta is the fan-requested Ewok "Corpsey" but given a name that wouldn't give Hasbro or Lucas some sort of fit.   This figure's claim to fame is being the one that another Ewok cries over when it dies.   It's kind of morbid, but as the figure itself isn't "dead" in appearance it's still one more great Ewok for your dioramas, armies, or toy box horde.

Nanta's head and body are basically a tweaked Nho'apakk, with a resized neck peg and, as far as I can tell, few to no other changes.  (Why, I have no idea.)   The figure is now mostly dark grey or black fur with a little lighter grey fur, while it seems the movie has very light or even white stripes on his fur.  So it's close, but not a perfect recreation of the one photo some dude posted to Wookieepedia.  The hood coloring isn't quite a perfect match either, but it's still a solid Ewok figure that builds off an existing design and makes something new and different to the point where I assume your average fan would have little or no idea it's essentially a repaint with a new hat.   Other than the figure lacking the color of his seeming on-screen inspiration, it's a nice release with 10 points of articulation representing a previously-unmade character.  This figure is the reason people like me are still here, we buy 30 more Anakins and Vaders in between new droids, Ewoks, and Rebel Pilots.  It seems a lot less exciting as I type it out, but let me assure you that Nanta and his set are worth tracking down if you have love of Ewoks in your life.  Sure it's expensive, but it's a good set.

Collector's Notes: The set is showing up more now, which is good, because a lot of you people freak out when you don't run the math.  Why am I saying that? For some reason people decided this item is only shipping at a rate of one-case-per-store, and that's just ridiculous. I believe the initial report posted at Rebelscum regarding the run size and other 2012 Hasbro Toys R Us exclusives indicated the US run of the set to be around 30,000 sets which many do not understand is a very large number.  How do I figure? I am so glad you asked!  According to Wikipedia, Toys R Us has around 875 stores in the USA.  So assuming these numbers are correct, and as Hasbro does not reveal its final edition sizes we do not and probably will never know for sure, that puts us at an average of 34 sets per store, which is not a tiny number.   Obviously some will be a little higher and some will be a little lower, but you get the idea.   Sure, some scalper could pick up all 34 units per store as a store puts out 2-3 cases at a time, but that's pretty unlikely.  Keep your eyes peeled for these hitting the shelves, and remember: if you see them and pass on them, and regret it later, it's not my fault.