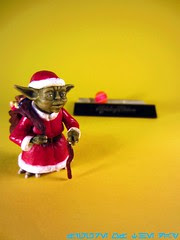 Bio: Hasbro and Lucasfilm Ltd. are delighted to present the second in a series of Star Wars Holiday Edition commemorative sets. Inspired by the artwork of renowned artist Ralph McQuarrie, this specially designed set captures the imaginative vision of McQuarrie's art in collectible 3 3/4" action figure scale. Our gift to you, this piece is a distinctive addition to any Star Wars colection. May the Force be with you, and happy holidays.  (Taken from the figure's packaging.)

Commentary: I actually didn't open this Yoda until this year, mostly because it was on the list of figures I was going to open after I got what I considered to be some form of permanent residence.  It's a very nice figure, and these show off just how far Hasbro came since the 1990s, during a time where Hallmark's Christmas ornaments were slightly more prized as collectibles due to their quality and authenticity, to some extend.  They were a harder material, and generally decorated significantly better than the toys of the day.  Flash-forward to 2003, and Hasbro is crushing them like a bug with figures like this Santa Yoda proving it.  It's a better item at a better price.  Suck on that, Hallmark!

This is one of the better Holiday Edition figures, as it actually looks like what the card represents.  Yoda has a mere 3 points of articulation, but sports a great head sculpt and articulated shoulders as well as a moving neck.  Each hand holds an accessory.  His right holds a sack filled with toys, while the left carries a cane.  Sure, Yoda's head departs from the card in that the figure's lips are parted slightly, but other than that it's a decent representation of the classic Lucasfilm Christmas card.  It has the big colorful ball (more orange than yellow) plus a green wooden toy block set on the base.  The base itself says "Holiday Edition" (no kidding) and has a nifty snowy design with tracks and footprints.  There's a groove in the back of the figure stand for displaying the card - a nice touch, to be sure.  The decoration is quit good with the toys in the back having lots of unique paint applications.  Having said that, they're a little muddy and it's tough to tell just what it is I'm looking at.  While hardly an essential figural purchase, it's a cute gift item and a nice holiday decoration.  You can do worse.

Collector's Notes: This figure doesn't actually have a name.  The front of the box doesn't have the word "Yoda" on it anywhere, and the back just identifies it as a McQuarrie art piece rendered in figure form.  How odd.  Also, the "2nd Edition" above refers to the packaging, which itself refers to this being the second in a series of Hasbro Star Wars Christmas figures.   There would be 4 total sets, although they could have called it quits after the first three and I'd have been pretty happy.