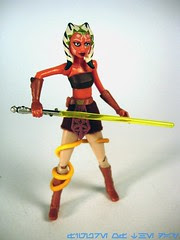 Bio: Ahsoka battles brain worms that infect her comrades, including clone trooper Scythe.  The Geonosian worms turn their victims into menacing zombies, as Ahsoka finds out during a flight to a medical station.   The Padawan must find a way to destroy the parasite and save her friends.  (Taken from the figure's packaging.)

Commentary: From a purely community-driven perspective, Ahsoka Tano is a fascinating character.  Kids like her, and there are anecdotes that the character is supposedly bringing in tons of new, adult, woman blood into the hobby and fandom.  True?  I dunno.  The ratings of The Clone Wars and sales of most licensed products aren't exactly on an upswing these days.  (Did you think the reason these figures weren't showing up at Walmart was because they were too damn popualr?  Hah!)

The figure takes the 2008 Ahsoka and gives her slightly improved face paint, which is nice because, let's face it, a decent face is probably one of the most important things any figure can have.  You could slap Hermi Odle's head on a small burlap sack and it would be a decent figure, so this one is a bit of an improvement.  The deco of her weapon and body isn't significantly different, but she is being attacked by what appears to be a very rapey Geonosian Brain Worm which is all sorts of creepy.  (This is how it was packaged, folks, I didn't pose it this way.)   With a decent amount of articulation, her very thin arms don't have the ball-jointed elbows so many fans crave.  Still, she's a good representation of the character and the optional brain worms are a nice bonus.  I would argue not as nice as Rotta the Huttlet, but hey, that's where I like to be.

Collector's Notes: Speaking of showing up at Walmart, this figure was supposed to have done just that.  She was developed as a 2-pack with a DVD for the chain, which as far as I can tell either never stocked them or only received a super-limited test run of them.  (I have only heard one report, sans evidence, of this set being sold there.)  The run was dumped at closeout channels like Marshall's or TJ Maxx, which seems to be happening a lot with anything that may have been a Walmart exclusive as of late.   If you can get it, get the set for the clone companion.  I'm still seeing these sets locally as of this week.