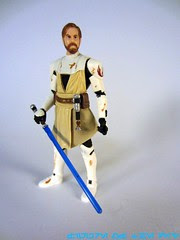 Commentary: It's always a little weird to see what Hasbro makes new and what Hasbro rereleases.  This Obi-Wan Kenobi is an awesome translation of the animated figure into the "realistic" style, fitting right in with your other figures.  It's also, by my count, at least the third "Clone Armor Kenobi" figure.  The first two were largely based on the 2003 animation design, while this one takes its cues from the 2008 animation model.  (The revised season 3 2010 model has yet to make the jump to "realistic.")   While not necessarily an essential release, I really dig this one and I appreciate that it brings a nice update of one of the best costumes to come out of the non-movie Star Wars mythos.

With 14 points of articulation, General Kenobi looks to reuse the limbs from the 2011 Clone Trooper at first glance.  When comparing Kenobi to the Clones, there's really only one piece that seems like it might be a straight reuse... everything else looks like a new sculpt.  The new Obi-Wan has swivel wrists, while the clones had bend-and-swivels.  The legs on the Clone Trooper were thinner, and the detail on the shoulder armor is different.  The gauntlets have different buttons on them, so it seems that the only reused parts on Obi-Wan Kenobi may be his lightsaber accessories.   Since 2012 we've seen nice "realistic" takes on Obi-Wan, Anakin, and Ahsoka with an announcement of Mace Windu for 2013.  If we get Hondo Ohnaka and some Weequay Pirates I'll be set for life.

Collector's Notes: A shared online exclusive, it's entirely possible  you won't ever see this figure sold individually for its suggested retail price in person.  But online?  Oh yeah.  Amazon's prices on some of these guys has been super cheap, to the point where I don't get why they're selling them below cost.  If you can get it cheaply, so so.