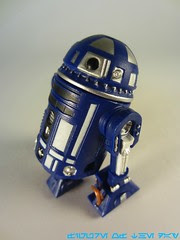 Commentary: Ah, it's the Christmas season.   That means I'm in the midst of my most sacred holiday tradition, which is re-listening to the five episodes of the classic Chunklet podcast.  (Reasons: Big Black, Mission of Burma, A Frames, Blood on the Wall, Scratch Acid, and I hate Christmas music.  'Tis the season for decent rock music.)  We'll also look at some Holiday-themed figures next week, as I keep neglecting to trot them out.  This has nothing to do with the R9-Series Astromech Droid but we've looked at a few of these by now.   This one is a decent release because the mold makes this color work.  The red one feels a little pock-marked and rough, but in blue it seems to smooth over much (but not all) of the rough edges.  We've still got silver panels, a black eye, and some other markings but it's obvious that this not-smooth dome really looks better in a darker color.  After looking at thousands of these goofy things, I can also say with quantifiable certitude that any and all astromech droid figures should have very glossy black central eyes... this one is a smidgen shiny, but the ones that REALLY shine are the most lively.   Because of its weirdness, I consider this a worthwhile purchase, although the green one ain't bad either.  I opted to stick it on the "dark blue" astromech body, which is actually a smidgen similar to R3-M3.

Collector's Notes:  This item was a customizable release at Disney Hollywood Studios in Orlando, and you can configure them any way you wish.  Well, in theory, that's assuming they have the parts you want and they might not.