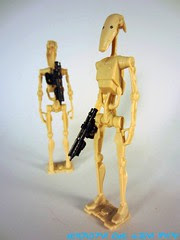 Commentary: There's a lot of figures we don't necessarily need resculpted, but hey, we're going to get them.  This Battle Droid is an interesting item which exists solely to serve as a slug figure in a much larger toy, the MTT.  This is a simplified new sculpt which looks really good, all things considered, and has a built-in figure stand so it may stand around on the droid deployment racks.  In short, it's as much an accessory as it is an action figure... it's cheap.  Fans lamented the fact that the MTT didn't come with 20 "Vintge" (read: expensive) Battle Droids, but given costs these simpler robots are an adequate substitute.   It's better than non-removable droids or folded-up non-articulated droids, which is what I would have expected from Kenner in the 1990s.

So how is the figure?  Good enough.  It's not great, but it actually isn't bad as a seat-filler.  Standing fairly tall, the figure has but two joints: the neck, and the right shoulder.  And that's it.  Each one includes a blaster which can be carried in the right hand, or in a hole on the back. The figure can usually stand on its own (the legs on some may need un-warping) and the only paint application is the eyes.   There's not a lot to it, but it makes for a decent driver for the hatch on your ATT or the MTT droid racks.  Since its feet are fused together, it stands fairly well and I'm quite impressed by Hasbro's decision to actually give him foot holes so you can put him on a figure stand if you're so inclined.  The arm and head are both a little loose, but the figure is likely to be more durable and likely to stay standing on a shelf than his many brothers and sisters since 1999.   It's very thin in spots, but functionally it's good.  You won't love this figure, and while some of you may even hate it there's no denying it serves a purpose fairly well.   I'm glad Hasbro gave us 16 of these buggers rather than empty Droid racks.

Collector's Notes: Not knowing how many Hasbro made, I would suspect the MTT will be showing up on closeout shelves in the coming year.  Not because it's a poor toy, but because it's pretty obscure, pretty expensive, and frankly, pretty blah compared to last year's Republic Attack Shuttle Vehicle/Fortress and the previous collector-friendly ships like the AT-TE, Turbo Tank, AT-AT, and Millennium Falcon.

Vehicle Notes:  We're pretty spoiled.  The MTT is pretty neat, but it's basically a big box with a single gimmick... even at $99.99, or $49.99, it's going to be hard to convince people that this is an excellent toy.  I almost wish the racks were not powered electronically to keep costs down, if a kid could just slide the rack out manually and push a button to deploy the droids I have no doubt it would be a much cheaper piece.   Plus the whole "deploy the droids!" play isn't as fun as, say, spring-loaded damaged TIE Fighter wings, or the ATT's battle-damage feature, or the split-apart Clone Wars Jedi Starfighters.  I do dig the numerous storage bays, though, as there are many places to keep guns and other small parts plus store spare figures.  In many respects, the MTT could have made a better action figure carry case-slash-vehicle than an electronic key driver/feature-based vehicle.  If they just stuck a handle on the thing and hollowed it out, it would be an awesome way to haul your collection around if you had a collection small enough to be carried by someone with two hands.