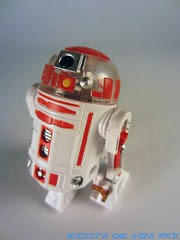 Commentary: When I first saw the red R3-Series Astromech Droid dome from the whole Disney Droid Factory, I said "Hey, didn't I already get this?"  It turns out no, I didn't.  While there was a droid from 2009 which looks similar, the deco is pretty different in that this one is redder, and has a silver box around the central eye whereas the other one was unpainted.  They are, fortunately, different enough to be interesting.   A yellow light under the eye brings the clear head some personality, and like his purple cousin from this line you can see right through him and into the body.  It's nice.

I chose the red "R2" body in the picture for this one, but you can slap it anywhere you please.  I really am happy Hasbro/Disney/whoever wants to take responsibility for this one made sure the deco was different from other droid releases, because for those of us crazy people who want one of all the droid parts, we want something different.   The figure has a hole in the dome for a droid hat, which looks better on some than others.

Collector's Notes:  This item was a customizable release at Disney Hollywood Studios in Orlando, and you can configure them any way you wish. While not my top pick, I can't argue that it turned out quite well and I look forward to seeing if there are any more R3 clear domes next year.  I also look forward to them ceasing making new parts to track down, because really, this is the most irritating distribution ever.  You have to go to Orlando and pay $100 just to see what they have, and heaven help you if they're out of right legs that day.  Hey Disney, if you're reading this: please let me consult on your eventual Anaheim roll-out.  I work cheap.  Here's the short version: look at LEGO's nicely-sorted pick-a-brick layout at the theme stores on your property.  Pieces are sorted by color and size.  This is nice.  Do that.  Your crappy little bins are set up like Goodwill, only more cluttered and harder to get through.