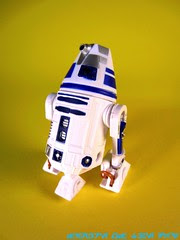 Commentary: A few years ago I decided it would be funny, as there were many to review, to do a solid month of Clone Troopers in Figure of the Day.  I think people started sending hate mail around day 14, so I didn't do it with astromech figures this year.  You're welcome.  Anyway, the R4-series Astromech Droid now comes in a blue dome which matches R2-D2's body nicely.  The pattern on the head is pretty much identical to the purple one, except, well, it's blue.  The silver and black is pretty much the same, so what you have here is a decent (and presumably easy-to-make) redeco.  It's a nice design, and it fits in well with my other figures.  The body I picked for this one was R2-D2's, because, well, blue.  There's not a lot of light blue here just yet so it's a nice match when it comes to augmenting your droid pool.

Collector's Notes:  This item was a customizable release at Disney Hollywood Studios in Orlando, and you can configure them any way you wish. There's not much to it.  Get one if you want one, I did!