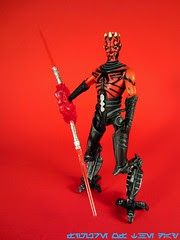 Bio: Darth Maul returns from the dead and is ready for battle on new cybernetic legs. With the help of his brother Savage Opress and a powerful Nightsister, Maul prepares to avenge himself against the Jedi who almost killed him.  (Taken from the figure's packaging.   You'll note, it doesn't quite match the story... or maybe it does, from a certain point of view.)

Commentary: One of the things that's good (or bad) about The Clone Wars is that it serves as a clearing house of ideas from the Lucas vaults.  The concept of Darth Maul as a half-cyborg, gloved arms, and no shirt with some sort of collar dates back to at least 2005, when we saw it in the graphic novel Star Wars: Visionaries.  Heck, we even got a "realistic" action figure of it in a comic pack in 2010.  It always baffles me when people cite some of this stuff as new and fresh and I'm sitting here going "Uh, no, I've had that in my closet for a while now thanks."

This Darth Maul is a better-looking figure with cleaner paint applications and a better face.  It's not a perfect translation of the cartoon, but as a toy it's great to look at.  (It will require a stand or assistance, though.)  The big clawed feet come straight from the cartoon, and it's really amazing just how slavish they were to replicating the comic design except the action figure has far, far shorter horns.  (Savage has some big horns, though.)  The ribbed, ALIEN-like lower torso is here, as are the ornate gloves, and even the unique grooves on his thighs.   They really went out of the way to make sure the New Maul looks a lot like the Old Maul you already have, but sharper and cleaner.  The streamlined sculpt looks fantastic, and makes me a little sad we're seeing so few animated figures these days.  Hasbro just makes better and better designs, too.

Rather than giving the action figure an action feature, they integrated it into the accessory.  That red blob on Darth Maul's hand has a handle in the center, and it spins around.  There are holes in it, and you can split Darth Maul's weapon and plug it into either side.   It's really clever and (if you ask me) a better idea than having a super-loose or geared wrist.  The figure is nicely poseable, the action feature is fun, and the paint job is simple, clean, and looks great.  I'm a big fan of this set and I do suggest you get one.

Collector's Notes: Target exclusives are often available for several weeks or even many months, as the production numbers are sizable and the distribution tends to be pretty good and surprisingly evenly rolled out.  If this figure is sold out by now in your neck of the woods, rest assured it was probably plentiful in October.  (It seemed to be in most markets.  Heck, it's still plentiful in Phoenix right now.)  I would suggest getting one at $20, I assume this set will be expensive down the road due to its including 3 desirable characters.  Unless we get a real Mother Talzin, of course, in which case all bets are off.