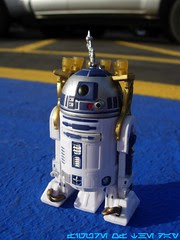 Commentary: This figure's an odd one, because R2-D2 was released in the 2010 Vintage line as a figure which exceeds the mandate of updating 1984 Pop-Up Lightsaber R2-D2 by leaps and bounds.  In the old days an R2-D2 figure had, at beast, 2 action features.  One? The dome clicks when you turn it.  Two? Either you had a pop-up scope, or a lightsaber that pops up.  And that was it... and we liked it!   This figure goes and basically shoves in most of the Original Trilogy features you could ask for, including the lightsaber stored in the dome, the famous sensorscope, a pop-out arm, and yes, a drink tray with removable drinks.  Back when the figure first hit you could get it for $8, and it's really hard to complain about getting a figure with this many moving parts and accessories for the price.  The deco is good, too, super-clean and factory fresh.

The figure comes up short- literally- among his brothers.  This is the shortest Astromech droid sculpt, but there's a reason: according to some sources, all the other ones are too big and this guy is closer to the right size.  In what I consider a decision of mercy, Hasbro opted to do only R2-D2 in the shorter size, and keep each and every other Astromech droid in the larger, "normal" size.   (If I had to re-buy the entire lot of them again, my head would explode.)   This version of R2-D2 doesn't have any particularly exceptional articulation, it's just as good as the others with a better compliment of accessories and I would argue a better attention to detail.  The panels and everything look a smidgen better, making this a worthwhile purchase.

Collector's Notes:  While I do tend to do the eyeroll thing a bit when Hasbro announces yet another R2-D2, I can't argue that this wasn't a good one for the issue price.  It's great.  It's impressive.  It'll also set you back $6-$15 on eBay, which is certainly a worthwhile price.

My only issue was a minor one. In the initial waves of the Vintage Collection, Hasbro showed an image of the first time the character was produced on the card back. They seemed to forget that they did a Sail Barge R2-D2 in 2004. They even used the same image on the front.