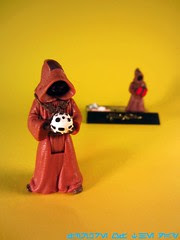 Bio:     Hasbro and Lucasfilm Ltd. are delighted to present the third in a series of Star Wars Holiday Edition commemorative sets. Inspired by the artwork of renowned artist Ralph McQuarrie, this specially designed set captures the imaginative vision of McQuarrie's art in collectible 3 3/4" action figure scale. Our gift to you, this piece is a distinctive addition to any Star Wars collection. May the Force be with you, and happy holidays.  (Taken from the figure's packaging.)

Commentary: This set is interesting.  It was the first Entertainment Earth exclusive, after being developed for the Fan Club which has historically had some interesting changes of management and whatnot.  The Holiday Edition Jawas (we're looking at the tall one today) has a short but weird development.  Around this time, and this was before I came on board at Entertainment Earth full-time, there were talks about making one of the Jawas bright red and the other bright green to distinguish them from the normal releases... a concept which would be revisited with Darth Vader later.  I kicked and screamed and basically acted like a little brat... so the figures have clear red and clear green eyes but are otherwise Jawa-colored, and the taller of the two figures actually looks like he could fit right in with your Sandcrawler dioramas.  The Jedi Training Remote could be found in a junkpile, so it's not out of the question that this figure (a retool of the delightful 1996 figures) could fit right at home with the movie collection.  I think this is the only figure in this sub-line that has that distinction.

Based on the 1996 sculpt-- it has a 1996 date on the back-- the figure is a little dated but still looks good.  The uni-leg remains, and is joined by a uni-arm as the hands are molded to the remote, so it all moves as one piece.  There's also a waist joint, but for all intents and purposes this is less of a toy than it is a decoration.  Like I was mentioning yesterday, this kind of product sort of kicks Hallmark in the balls, so to speak, as you can just stick an ornament hook in a figure's head for $10 and it looks way better than a $16-$20 resin figurine.   The set is an adequate representation of the characters on the Ralph McQuarrie holiday card, and in 2004 there were (if you can believe it) still only 3 different molds from which to choose for your Jawa needs.   This one, with the twin bandoliers and red (almost orange) eyes just seems to be a clever reuse of existing tooling and it serves a need nicely.

Oh, and there's a display base with the golden words "Holiday Edition" with a sandy base and two wrapped packages.  This would be a kajillion times better without the nameplate and the packages, but for the purposes of a holiday item it works nicely.

Collector's Notes: We had this in stock at Entertainment Earth for years.   It sold pretty well, but it would seem that the best audience for Star Wars mixed with holiday kitsch was (and always will be) Walmart.  Loose samples are as cheap as $6, packaged ones are around $20.  It's the last "Holiday Edition" set that actually looks like the card on which it's based, the last one being a cherry red Darth Vader which may be the only figure that I feel like a chump for buying.  I would laugh at me knowing how much I hate that figure.