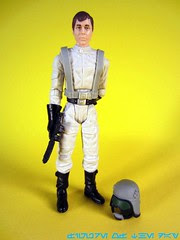 Bio: These two Imperial troopers find themselves in trouble when they encounter a couple of Ewoks and one giant Wookiee.  The unlucky driver is knocked unconscious by Widdle Warrick, Wunka and Chewbacca.  The gunner fares no better: he is unceremoniously tossed out of the vehicle by the trio.  (Taken from the figure's packaging.)

Commentary: This is a really interesting one.  The AT-ST Driver is director Richard Marquand, best-known is the dude who helmed Return of the Jedi.  The card game identifies the character as "Major Marquand," but Hasbro gives him a less specific name despite having a head which looks more than a little like the director.  The figure's super-articulated 14-joint body was used with a Hoth AT-ST Driver in 2010, but was given a number of upgrades.  For starters, the helmet now has goggles stuck to it and it looks way, way better than the separate goggles.  They're also given green lenses, which look quite distinctive.  The head is particularly lively, the color of plastic looks great even in dim light and the eyes have a tiny simulation of a spark of life behind them, thanks in part to a good choice of paint and a couple of very small, very subtle wrinkles.  Sure, he looks plastic, but the figure manages to feel just a little more alive than others.  I'm loath to keep him behind a helmet, it just looks so well done.  This AT-ST Driver is good in so many ways that the Vintage boxed AT-ST vehicle isn't.

The blaster is a typical Stormtrooper blaster, but here's where things get weird.  There was supposed to be another change to the figure which you can see on the package, which either the factory (this is my guess) or Hasbro (not as likely) left out for some reason.  There are straps on the figure's shoulders and belt, just like the 2010 version.  However the packaging shows a couple of minor sculpting changes, including a holster for the blaster!    Given that this might get in the way of a figure sitting down inside the vehicle, I am not completely sorry to see it go.  It fits in the AT-ST head just fine, and is, if you ask me, the very best AT-ST Driver action figure your money can buy as of today.

Should this set wind up on clearance, I think I'm more likely to clear Kmart out of these guys than the Ewoks.  They're really well-done, and I honestly did not anticipate liking them so much.   I've got three "modern" AT-STs needing 2 pilots each, so should these ever go down to $10 or less, I'm cleaning them out.  For $15 it's an amazing value and it's a wonder Hasbro opted to leave these off the Vintage cardbacks.  Actually, I thank Hasbro for NOT putting them in the main line because unlike the 1990s, today, the only way you can pretty much be guaranteed to (eventually) find a figure is if it's a store exclusive.  The regular line stuff remains elusive these days.

Collector's Notes: DON'T PANIC!  Kmart exclusives are generally quite common and wind up on clearance, but are slow to roll out.  Also, Kmart's web site is notorious for filling orders with the wrong products.  I suggest being patient and/or networking here, as the numbers tell us Hasbro made a good number of these and they should be plentiful in the next few months.  The packaging is really nice too, although it's astonishingly wasteful.  It's about twice the size as it needs to be, you could cram the Ewoks in this box and have room to spare.

I think this figures body is akward and pretty aweful. Not only is the abdomen to elongated, but it keeps seperating from the legs! It also doesn't stand too well. I put the heads and gloves from these figures onto the latest scanning crew bodies. Much better!