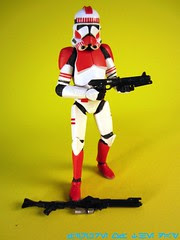 Commentary: We got to a point in Star Wars where we're basically running a victory lap.  The Vintage line, if you take a step back, is a great entry-level line with tons of fan favorites and an adequate mix of "new" figures.  The Shock Trooper is not one of the new figures... technically, his entire wave of six figures is "been there, done that" with some improvements.  This figure is notable in that it's the third super-articulated version of the Shock Trooper, only this time it's based on the 2011 Vintage Clone Trooper body complete with ball-jointed hips and bend-and-swivel wrists.  Oh, and you get a removable helmet too, even though (if you ask me) that needs to stop as the solid helmets fit and look better.

Previous Shock Troopers were based on the III-06 mold (quick-draw arm action) and III-41 (Clone Trooper with the antenna backpack), so this one has similar-but-better articulation.  He's a little bit thinner, and as he's based on the Attack of the Clones body there may be some minor changes between the suit sculpts.  While I think the helmet could be improved and the deco could use some scuffing or something to add visual interest, Hasbro did a nice job making sure the red wasn't too glossy and that the guns had some painted details to make them look interesting.  I don't know that this figure is $10 worth of interesting in this particular era of collecting, mostly since a significant percentage of the Vintage line is stuff we long-term fans already own.  If the price is right, grab one, but odds are availability and the price combined will make it difficult (if not impossible) to do any serious army building.

Collector's Notes:  This item hit big around September, showing up at Walmarts and Toys R Us stores.  It hit online around July, and also came in the San Diego Comic-Con exclusive Carbonite gift set.  I would advise paying less than $15, or $12ish tops before shipping/tax really.  At this time no fewer than 5 figures share this body: there's also a ROTS White Clone, a ROTS 501st Clone, a plain white AOTC Clone, and a blue AOTC Clone.  And we're getting a green AOTC Clone early next year, so there.

We're also getting a 212th Clone early next year using this mold. Hasbro does love their clone repaints.