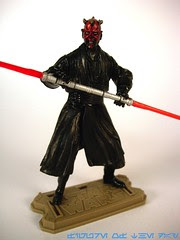 Bio:  Darth Maul duels Qui-Gon Jinn and Obi-Wan Kenobi in the Theed Royal Palace on Naboo. The Sith Lord handles the lightsaber with supreme skill, making it difficult for the two Jedi to gain the upper hand in life-or-death confrontation. Maul slashes at his opponents with his double-bladed lightsaber as the three duel from the hangar bay to the generator complex.  (Taken from the figure's packaging.)

Commentary: With dozens of Darth Maul figures and few different costumes, it's increasingly tough to suggest any new version is worthwhile.  While the Naboo Battle Pack one had an exceptionally good sculpt and superior likeness, this one is worth getting mostly as a desk toy.   The head sculpt is OK, but the expression and paint job is merely acceptable.  The face design just doesn't seem quite right, but the leg mechanism works quite well.  If you squeeze his legs together, he does that little dance where one arm goes up, another goes down, and you can make pretend he's fighting.

As a figure to live on your desk for you to futz with while pretending to work, it's fair amount of fun.   Since it was developed for the kiddie line around a gimmick, it's more than a little limiting as it can't fit in the vehicle o really do much of anything other than "fight."  The sculpt is good, but not great, and the main reason to get really excited about this one is the one-piece double-bladed lightsaber with the "flared" blade, with extra energy deco near the hilt.   Believe it or not, no Darth Maul figure with a completely plastic lightsaber had that additional detail until 2012.

Collector's Notes: This figure was packed at a higher number in the assortments, but sold quickly due to fans loving the character and using the head as a replacement for the Vintage one.  You may be able to find one at a store still stocking Movie Heroes.  New Movie Heroes 8-packs at Walmarts just showed up with this guy and the other Wave 2 guys, all in a big envelope, for like $25.  It's a killer deal and if you love toys it's one worth getting.