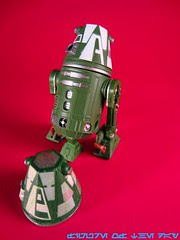 Commentary: Now in green (again), the R4-series Astromech Droid domes at Star Tours look a lot like R4-J1 from a few years ago.  I included the dome in the comparison to show there were indeed unique deco changes, as the 2008 Legacy Build-A-Droid has an "e" on the side and lots more damage and grit on his person, while the 2012 Disney release is clean, mostly white, and has something that looks more like an "A" or an "R".

It's OK.   The dome itself is just different enough to warrant your attention, and has the hole in it for hats if you're so inclined.   It's neat, it's green, and you could probably skip it if you're short on time, money, or those awful limits in line at the theme parks.

Collector's Notes: Still a pain to get.  That's normal, sadly.