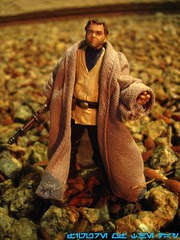 Bio: Owen Lars fights Darth Maul to protect the life of his young nephew, Luke Skywalker.  The Sith apprentice has returned from the dead to hunt down Obi-Wan Kenobi, the Jedi who destroyed his life. Owen's quiet moisture farm on Tatooine becomes the scene of a deadly battle between the forces of good and evil.  (Taken from the figure's packaging.)

Commentary: This figure (and indeed, this entire set and the comic which inspired it) are more interesting historically right now than they were in 2010.  Owen Lars is not what made it interesting, although he's pretty great.  The figure was an all-new or at least mostly-new sculpt, giving us a version of Owen from about a solid 15 years prior to the original film.  His outfit is a mix of prequel and trilogy elements, and because of this there's a sliding scale for authenticity.  I really like the figure overall, although it sort of sticks out as an odd duck as it doesn't really belong to any category in the line.  He looks great but other than Maul, it's not like there are many other characters from the story in toy form.   He's super-articulated, painted well, and has a nice cloth coat.  I don't have much reason to complain other than I don't have an aging Obi-Wan Kenobi or younger Luke to go with it.  It's a nice design, and with a little paint I bet it could make an acceptable-to-great 1977 Owen Lars.

Collector's Notes: The set seems to have finally gained real interest, $40-$80 on eBay, and Amazon prices are right in that range too.  I blame The Clone Wars for reusing the Maul design from this comic, people like it and now are willing to shell out some cash.