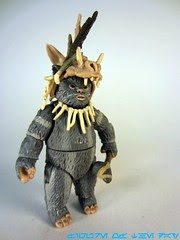 Commentary: To say that Teebo's costume has been the subject of controversy would be to further demolish what little meaning words have left, so let's just say it's been a fun topic of discussion.  The Kenner 1984 Teebo had a hood like the figure pictured, while the 2001 Hasbro had a sort of a bib.  Which is more correct?  Well, neither, so Hasbro decided for this 2012 release that we'd get everything.  The short little guy has a necklace, drumsticks, different versions of a very ornate (and nicely painted)  hood, and more all plied on to the body originally used for Logray (and later used for Lumat) over the last few months.   The body type is notable for being the only Ewok buck to sport elbow joints, and the figure has a fairly robust 12 points of articulation.   Seeing how this figure came with all of the parts to replicate either previous costume used for the Teebo action figure, it's pretty much definitive.  You can throw your old Teebo figures out now.

THe face has some nice deco as well, with a little bit of flesh peeking out from around the fur near the eyes, nose, and lips.   The fingers are pink, the toes have painted toenails, and you get some decent grey stripes on the furry body.   While this set was more expensive than I would deem appropriate for the shorties, Hasbro didn't take any shortcuts on these guys.  Considering this is the last Teebo you'll ever need to buy, you may as well shell out some cash and get the set.

Collector's Notes: I got my money's worth.   Sure, I miss the days of 2 Ewoks for $6 or $7, but I also miss $1 comics at my grocery store and the ability to buy a can of soda for 25 cents.   If Hasbro's going to jack up the prices, at least they made this a fairly deluxe figure.  Still, I'm sure fans will clamor for an eventual reissue on a Vintage-style cardback, so keep your eyes open for those in, let's say, 2014 or 2015.  Because why not.