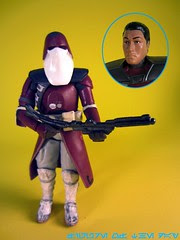 Commentary: Almost the very definition of "just different enough to make you mad," this version of the Galactic Marine would be skippable were it not for the handy fact that, as an army builder, you'll want another one.   They biggest and most obvious differences between this and the normal carded release are the mud/damage markings on the figure, plus his pants.  The 2007 individually carded Marine has dark grey pants, and this one is a much lighter grey color.   There are some minor color batch variations, but other than that they're quite similar.  According to the renderings I've examined, this Battle Pack version is slightly more accurate to the movie.  Of course, lighting varies depending on the environment so I suppose it's up to debate, but the raw renderings of the troopers really do seem to have lighter pants.

Articulation is the same as the other marines, with about 14 joints in the usual places.  The skirt prevents the figure from sitting, and the design has legs fairly close together so he may require a stand for stability.  He can still stand, but his center of gravity could probably use a little help.   While there's a lot of articulation, it doesn't necessarily give a great range of movement.  Sure, he's got a lot of moving parts, but he's pretty stiff overall. If you're trying to pare down your collection and only want one movie-accurate version of the Marine, I'd suggest getting this one and this entire set.  The Bacara and Ki-Adi-Mundi make it totally worthwhile.

Collector's Notes: This set was hard to get, and still is.  The price on the secondary market varies, but $30 isn't too far off from normal.  It's worth $30 to crack open and enjoy, but higher than that may be a little more painful.  It's still a solid set, but I don't know that I'd be happy shelling out $60 or more for it.

Email ThisBlogThis!Share to TwitterShare to FacebookShare to Pinterest
Labels: Clone Trooper, Revenge of the Sith, TAC