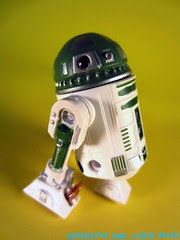 Commentary: Yeah, it's time to examine the Green R9-Series Astromech Droid because I've got columns to fill and deadlines to meet.  Do you know that because of this and my other Figure of the Day column, I have to write 2 columns 5 days per week minimum just to keep up?  It's true!  That's why some of these look like they're kinda rushed.  I got quotas to meet before bedtime.

This one is a green redeco of the red and blue ones.  That's pretty much it.  The green plastic has a decent amount of detail but the sculpting is a little rough still.  The green plastic absorbs some of the texture, so the roughness isn't as noticeable unless the righting is just right.  I tossed the green dome on a white body with green panels, because they ran out of green bodies with white panels.  The figure has similar articulation to other such figures (arms, feet, neck, removable third leg) and can be customized pretty much any way you wish.  Kids are cobbling them together in weird combinations that would give 8-year-old me some sort of a fit, so don't do that.  It's just not right.  The figure looks really neat though, and the green dome is one of the better colors for it.  Extra special thanks to our pal Shannon for helping us to obtain these figures!

Collector's Notes: Not many of these show up on eBay so expect to pay a hefty premium if you can't get it at the theme park.  Also whip out a calculator, because admission to Disney Hollywood Studios is like $100 and the amount of time and energy you spend in line may not be worth it compared to the eBay buyer premium.  Just a suggestion.  For the time being, Disney Hollywood Studios is the only place you can buy an R9 of any color.