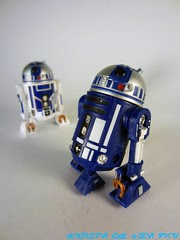 Commentary: You can make R2-D2 using parts from the Blue R2-Series Astromech Droid, but to most kids it would seem all astromech droids are "R2-D2."  They were out of R2 bodies when I was at Disney (I managed to get one later) but you can also  build a swell blue droid using the dome, or even use an R7 body if, uh, well, things did not go as planned, let's say.   This mold in these colors lends itself to numerous varied builds, and I gotta say I really do like how the R7 body looks with the dome.  My favorite build (not shown) is just giving R2-D2 the Indiana Jones hat, it's odd but it just seems like a really perfect fit in terms of personality.

Since R2-D2 is available in build-a-droid Droid Factory pieces already, you may not see a reason to chase down this version.  It's painted slightly differently (note the red light) and has a hole in its head, but it's still basically R2-D2.  If you love R2 or need to collect them all, it's worth chasing down.  I like the coloring a lot, and the vibrant red dot actually makes it worthwhile if you ask me.

Collector's Notes: Probably not worth the asking price relative to other toys you can get, but if you're like me you have a problem and want them all.  So yeah.  Go ahead and get it, you know you want to.

I've gone blank on how the R2-D2 and C-3PO made from build-a-droid parts are available... HELP?