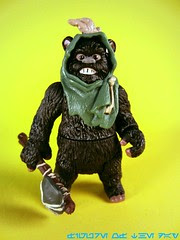 Bio: These two Ewoks take over an AT-ST walker during the Battle of Endor helping the Rebels in their fight to seize an Imperial bunker.  With their new friend Chewbacca, the Ewoks hijack the Imperial walker and toss one of the troopers out of the AT-ST while knocking the other trooper unconscious.   (Taken from the figure's packaging.)

Commentary: Likely the figure Hasbro meant to do when we got Oochee in 2007, our recently-released Wunka probably technically (or not) a new figure.  It also elicited "I think that's racist" from the Mrs.  The figure is based on a frequently revisited 2007 Ewok buck except with a new head, new weapon, and new hood.  The eyes and teeth are expressive to a level which makes me feel uncomfortable, particularly under harsh lights and the lens of my camera.  The fur is dark, like in the movie, and there's just something a little more unnatural about the teeth than I'd like.  If anything, they remind me more of Darth Vader's "mouth" with the strong, vertical lines.   If ever you wanted an Ewok action figure to look like a creepy Ewok action figure, this may be the very best of them.

The hood is great, the axe is fine, and the body is good.  No complaints there.  It's just the eyes and teeth that are rubbing me the wrong way, and I don't really know if it's a sculpt issue or a deco issue.  Either way, it's a must-have for Ewok completists and for figures with disturbing facial expressions.  There aren't many genuinely unsettling Hasbro action figures but this one makes the cut, despite it generally being, if I were to go down a checklist of what should make a good Ewok toy, pretty good.

Collector's Notes: This set showed up later than anticipated but is pretty findable in markets which still have Kmarts.  For $15, it's great.  For $12, it's greater.  For $25... it could be better.  The sheer amount of wasted packaging is almost painful, you could probably cram 6 or more Ewoks in this figure's 2-pack box.  Not that you would... but you could.  It might be on clearance at a Kmart near you right now.

I always love the blog. You always do such a great job, this one in particular you outdid yourself, I almost lost it with the "expressive to a level which makes me feel uncomfortable"