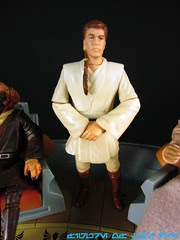 Commentary: Another day, another Obi-Wan Kenobi.  The Jedi High Council made use (and reuse) of figures which fans weren't clamoring for in the slightest, as this particular figure was one of the nastier pegwarmers around 2000.  Of course, back then it had a really neat plastic cloak and lightsaber, and this time around... it doesn't.  The figure is fundamentally the same as the 2000 release, with minor batch differences in the plastic and paint, in particular the face and hair.  The 2000 version looked a little more lifelike, plus the gear just brought it to life.  All this figure can do is stand around, he can't even really sit since his plastic "skirt" is a little too stiff.  With only eight joints, it's not like it stands out as one of Hasbro's finest either... it's acceptable, and while I think it was better (in 2000) than the previous sculpts, by 2004 it really could have used a refresh.

This mold and variations on it - including head swaps - continue to ship to this day.  The same body is used for the Obi-Wan Kenobi which you'll find in the MTT from 2012, but it has a different 2000 head.   Unless you're a hardcore Jedi fan, give this set a miss.

Collector's Notes: Kenobi... Koth... Koon... hey, what a minute!  What are you trying to pull here, Hasbro?  I kid. Anyway, this set is worth about $26 which is a smidgen under inflation.   I suggest buying it only for the diorama elements.