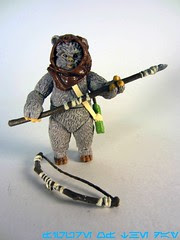 Commentary: As a kid Lumat was one of my favorite figures, so this long-in-development update is something I was super jazzed for late last year.  He was one of the later batches of original Ewoks, and when we got Graak in 2007 Hasbro made mumblings that made it feel like that might be our vintage Lumat update.  Thankfully, it wasn't, and now we have one.  based on the Logray 2011 body, this figure has elbows!  Seriously, elbows! Did you ever think we'd see an Ewok with 12 points of articulation when the line rebooted in the 1990s?  I didn't.  This is pretty amazing stuff, and the fur texture and painted detail is incredible.  The head and face are colored similarly to the cardback photo, and the hood has a swell quiver attached to it.   You can actually remove the arrows, or even clip one to the bow!  It's a great improvement over previous toys and gives you more bang for your buck, which short Ewoks really do need.

What's more, he has a spear if you'd prefer that option.  For a figure which could have just been a 2007 Graak repaint, Hasbro did a nice job using a new sculpt with tons of nifty new accessories too.  If you like Ewoks, buy this one.  You'll be glad you did.

Collector's Notes: Also a less-desirable figure from the last wave, it's going cheaper on the secondary market.  $7 or less in December.  For that you're a fool to pass this one by!