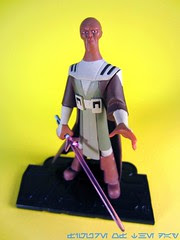 Commentary: The 2003 Clone Wars series gave some characters pretty memorable adventures, including 2 short episodes where Mace Windu kicked the snot out of droid armies using the Force and what I assume must have been some serious rage issues.   For the series, his costume added Clone armor elements and kept the awesome purple lightsaber.   His arms and neck are jointed, but like the rest o this line he's basically a statue with limited movement.   He looks amazing and that lightsaber looks really cool, plus the figure retains the simplified, blocky-in-spots look seen in the cartoons.  I wish the face had a little more paint or a few painted black lines to make the details pop more, but it's still a nice figure.   Some darker eyebrows would've been nice, though, as the figure has some nifty personality sculpted into the head which could use some exaggerating.

Collector's Notes: Since this line sort of fell off the fan radar, you should be able to get this figure cheap.  And if you can't, email me, I might have a spare.  A realistic version of this figure was released in late 2003 and was one of the first ball-joint headed figures in the line.

Man, the old Clone Wars cartoons were awesome! The blow the new CG ones out of the water