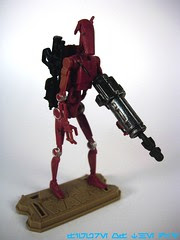 Bio: Battle droids are the perfect soldiers - programmed to fight without hesitation and deployed in vast numbers that overwhelm opponents.  Individually, though, their limited cognitive ability makes them vulnerable when they go up against  skilled Jedi who can outwit and outmaneuver them.  (Taken from the figure's packaging.)

Commentary: There's a weird place in which some figures dwell, as solid concepts with decent executions but a fatal flaw like a bad eye deco job or a terrible price.  The Battle Droid is one of those horribly overpriced figures, I'm unsure if it was a poor execution due to factory communication or something else.  In 2010 and 2011, you could get a 2-pack of Saga Legends Battle Droids for about eight bucks, and each one had 12 or so joints.  And two stands.  And two guns.  And two backpacks.  It was more than we deserved for the price, and in 2007-2009 we frequently saw 2-packs of 6-jointed Battle Droids for $7, which was really good too.  That's why this one, at $9 or $10, was something of a stunner.  Ten bucks?  For a redeco of a six-jointed figure?

Anyway.  This figure is very similar to the 2007 Saga Legends Maroon Battle Droids 2-pack, with some minor batch differences.  If anything, I'd say the 2012 one is a smidgen redder, but it could be my imagination.  The big difference is the gun, so if you got the 2012 Tan version of #MH04 you could probably skip the red one.  I'm really not sure WHY Hasbro did a red one, as the red one was produced second and the whole Phantom Menace theme makes sense for tan droids.  Red ones are in Attack of the Clones, but whatever.  It's here.  Get one if you want!

Collector's Notes: Like the clone we looked at yesterday, ask questions before buying if you can't buy it in person.  It and a red redeco share the same SKU, but oddly have different Galactic Battle Game cards.  Were cost not an issue and this was a $5 or a $6 figure, it would be good enough for the asking price.  At $9, it's only advised that you buy this if you are some sort of archivist or toy columnist.