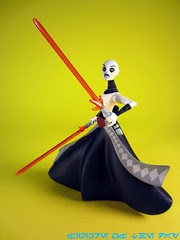 Commentary: She's become a heck of a lot more popular since her 2003 debut. Asajj Ventress really broke out last year on the current Clone Wars TV show, where she's become a slightly more conflicted villain rather than the two-dimensional "let's kill all the Jedi for some reason" witchy warrior from the old series.   In that old show, she had a great look with empty white eyes lined by a thick black line.  Her blue/grey lips are drawn down, with her eyebrows raised high giving her a look more of detached scorn over anything else.  Her outfit is sculpted quite nicely, with painted ridges around her neck, sculpted quilting in her chest armor, and a slick flowing dress.  The black part really flows nicely, and was in line with a short 2-year run of really bulky, really cool sculpted dresses on numerous lady figures.  Her coloring isn't quite as ornate, nor is her face as mean, as her animated counterpart but she's quite good and I'm sure you could paint her to be an A++ instead of the A-level figure she turned out to be as it is.  Get her if you can!

The lightsabers fit right into her hands, with swivel shoulders and a ball-jointed neck giving her limited ability to move.   The sparks of the ignited lightsabers look great, plus a companion Yavin IV battle Anakin Skywalker exists so the two can duke it out.  (He even comes with one of her sabers!)  The included display stand is icing on the cake.

Collector's Notes: This figure sells for under $5 on eBay, a couple of bucks as part of a lot.  She costs a little more on Amazon, I would suggest not paying more than $10.  Not because she isn't worth it, but rather because you should be able to get a screaming deal without too much trouble.

These are among my favorite figures and, should I ever get rid of my collection of SW stuff, will be some of the very few that I keep.