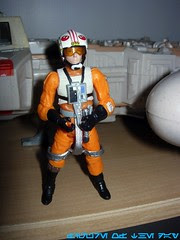 Commentary: The funny thing about this particular Luke Skywalker is that it came out about a year after the Vintage 2006 X-Wing pilot version, and is tons better.  This basic figure was released in the Walmart-exclusive Droid Factory set, and basically unchanged again in the 2011 Toys R Us-exclusive Death Star Trench Run collection.  This Droid Factory Luke is a zillion times better than the Vintage one.  Don't even bother getting it, just get this one.  Both have the same (incorrect) Darth Vader lightsaber hilt for his belt, but once you get beyond that we're talking Big Improvement here.

The 2008 release adds lots of deco to the helmet.  Note the black stripes on the yellow rectangle on the helmet, the black lining on the sides and interior of the helmet, the black stripes along the sides of the helmet... basically, it's a lot of black.  At first, I thought this figure was a dud because it still didn't have battle-damage or scuffing, but the reality is the newer release puts several paint apps that just plain weren't there in 2006.  But wait, there's more!  The straps around his legs and crotchial zone are now painted shiny silver, the map on his left forearm is loaded with more paint whereas the previous release was virtually unpainted, and his belt is now grey instead of brown.  The later release is significantly more striking, and most if not all of the changes bring it much closer to being accurate to the film.  Oh yes-- and it provides significantly more bang for the buck.  The Walmart exclusive set was $10, plus it included a really cool R2-D2 and a C-3PX piece.  And the vintage figure?  Not so much.

Luke has 14 points of articulation and is pretty nicely articulated.  It's not perfect, the straps do get in the way of him being a good pilot as any stiff plastic acts sort of like a skirt piece.  It can still bend, but it's annoying.   There's a hole in the belt for the lightsaber, and at this point I can't imagine getting more detail or articulation into this costume without making a bigger figure or bringing back soft goods... and old-school t-crotches which are great for vehicle pilot action figures.

Collector's Notes: This figure set, by itself, has been creeping up.  However, the lot of 6 can sometimes be had cheaply, and it should be bought if you like to collect robots.  I assume that you do.  It's a great Luke and easily the best X-Wing Pilot Luke you can get right now.