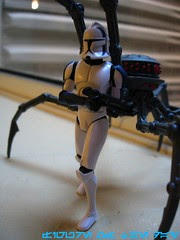 Bio:  A spider assassin droid attacks clone troopers in the cargo hold of the Coronet. Duchess Satine is on board the ship, heading to Coruscant to meet with the Senate.  The Mandalorian splinter group Death Watch, which wants the duchess out of  the way, has sent a spider assassin droid to attack her.  The deadly droid strikes two clones as assassin droid spawn slip away to carry out the treacherous mission. (Taken from the figure's packaging.)

Commentary: It's Mixer!  This Clone Trooper came out in 2011 in a set which seems to be around in some stores to this day.  It's not a bad set, it's just priced that way.  Two clones and a jumbo droid are great toys, but these were made before the "lamp" helmet got sculpted and released, so it is what it is.  And what it is, is pretty cool.  You get a nice Clone Trooper with a blaster and a unique armor decoration available nowhere else.  That's one thing I'm pretty glad about, Hasbro generally makes each Clone pretty unique, particularly since they got beyond plain white figures.   Sadly, that run seems to be dying down a bit so the unique troopers like this are far and few between.  With blue stripes on his shoulder and helmet, the figure is one of Anakin's  boys and is based on the newer "Stone" body.  Which, now, is antiquated.   You don't get ankles, but it is nice and skinny plus painted fairly well.  Unless, of course,  you wanted the helmet lamps in which case too bad.

Collector's Notes: It's probably not worth your while to pay more than retail for this one.  It stuck around for over a year in most markets and for all I know is still available, dusty, at a store near you.  I saw tons back in December.  I would say get it if you love the show, because it's not like there's a heck of a lot else to buy since 2012 started.