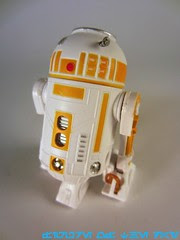 Commentary: It's Yellow R8-Series Astromech Droid!  I really like this, and the yellow looks great.  I gave it an R7 body with yellow markings, as the deco makes it look quite different.  The eyeless dome is a little creepy, but the red dot and a dish help give him some personality.  The top of the head has a hole in it for a hat, and looks a little bit like a bowl in which to dip your chips.  I like it.  It's bright and cheery, yet decidedly retro with lots of rectangles.   I admire the restraint in its design as many other droids seem to be a little too busy, while this one almost seems like it took a step closer to the modern simplicity of personal electronics.   As a non-movie droid his appeal is probably squarely to tourists and droid weirdos, but I dig it and I think you might want to track it down.  The yellow Star Tours droids are all really swell.

Collector's Notes: It's not bad.  It's probably worth the extra few bucks.  Don't go bonkers, but if you have to shell out $20 it's pretty much worth it.  It's unique and unlike other droids you can buy in stores, it's a real shame you have to drop a $100 cover charge and a trip to Orlando to buy these.

That one is really pretty cool!
I'm headed to WDW this July with my family, and if these parts are still available when I get there this one will surely go home with me!
Nice!