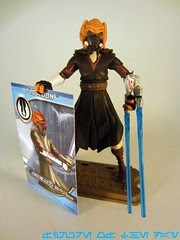 Bio: The famed 104th "Wolf Pack" Battalion serves under Jedi General Plo Koon and is led by Commander Wolffe.  At the Battle of Abregado, the entire battalion was decimated, losing only Wolffe, Sinker, and Boost.  Only luck, ingenuity and the unyielding determination of Plo Koon kept them alive.  The troopers' armor was originally red, but Wolffe, changed it to blue-gray to honor the many comrades who were lost in the battle.  (Taken from the figure's packaging.  It's weird. "Losing" only..?  No, "Leaving" only.  Argh.)

Commentary: This Plo Koon mold has been around for a while and has received a few redeco treatments.  A 2009 Target Battle Pack had him in a different shade of brown.  A 2010 Speeder Bike pack-in added knees and a cloth skirt.  This 2012 version is pretty much the same as the 2008 release, minus some accessories.  The individual lightsabers are not present.  The plastic head-covering hood accessory is missing.  He includes a Galactic Battle Game card, but it's recycled from the snow gear version from early 2012 and does not feature new art.  So why get it? The clones, of course!

The figure itself has some batch differences in deco.  The head lacks the intense wash (or wipe) of brown paint, which gives it a cleaner, more cartoony feel.  The red symbols on his forearms are now a brighter red.   Other than that, it's pretty much the same figure with 10 points of articulation and not much ability to stand.  Unless you put it side-by-side with the 2008 version, I doubt you'd know it was different.

It's still a very good figure with a great sculpt.  By today's standards his stance is winder and he's a little thicker, as opposed to the skinny figures we enjoy today.  (Or enjoyed last year, at any rate.)  If you don't have an animated Plo Koon, this is a fun one.  He lacks the cartoon-accurate lightsaber, but I like the double-bladed gauntlet weapon so much that I don't care.  I'd rather have this, personally.   He looks good and his joints are nice and tight, so if you're going to get this set anyway (and you should) this is a perfectly good Plo Koon for your figure collection.  Of course, if you want all the accessories from the other releases, you've got more figures to buy.

Collector's Notes: It's not bad.  The set's price has been in flux since its release, going down to as little as $15 last year.  Don't overpay for this one, but $30 or so is a pretty solid price for the set.